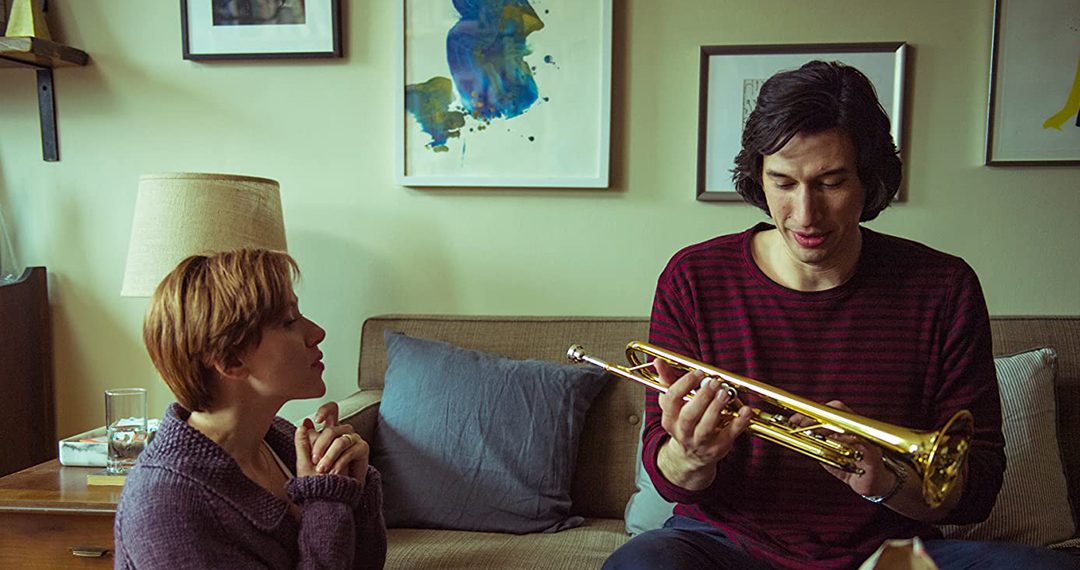 “Scoob!” is also new to Blu-Ray this week.

“The first thing we do, let’s kill all the lawyers.”—Dick the Butcher from William Shakespeare’s “Henry VI,” Part 2, Act IV, Scene 2.

I thought of this quote while watching writer-director Noah Baumbach’s riveting drama “Marriage Story” and couldn’t help but find it apropos. Charlie and Nicole Barber (Adam Driver and Scarlett Johansson) are a couple going through a separation. It’s made clear in the beginning that they were once very happy. The reasons pulling them apart are not revealed immediately. Rather, they are woven into the framework of the story at appropriate intervals. What is clear is that once lawyers get involved in their break-up, the couple goes from amicable to acrimonious very quickly.

Initially, the pair want to work out their parting on their own. There is no doubt in either of their minds that their marriage is over, but they want to remain as friendly as possible for their son Henry (Azhy Robertson). It’s important to both of them that he have some level of stability and normalcy in his life. However, once Nicole gets hard-nosed divorce lawyer Nora Fanshaw (Laura Dern, in an Oscar-winning performance) involved, it forces Charlie to get a lawyer of his own. His first choice is Bert Spitz (Alan Alda), a calm, fair-minded, level-headed man who has compassion and understanding. He’s basically a great guy, which of course makes him a terrible divorce lawyer. The man who really gets things done for Charlie is the expensive Jay Marotta (Ray Liotta). He’s exactly the kind of combative cut-throat counselor that most people in Charlie’s situation would want representing him.

But is this healthy? In the beginning of their separation, Charlie and Nicole were going through mediation. That was difficult enough. The involvement of lawyers upped the ante. It took two people who at first seemed too friendly with each other to ever do anything bitter or spiteful—even though the love in their marriage was gone—and set them on one another. In the beginning, they would never say or do anything to hurt each other. Enter the lawyers and tempers flare, resentments come to the forefront, and the two battle each other in court and privately in harsh and recriminate arguments.

Son Henry becomes a pawn in their back and forth chess game, used constantly by either side as the reason why things should be done a certain way. But it’s not really about Henry. It’s about the power they have over one another because of him. Henry’s desires are largely ignored. For much of the movie, I actually thought Baumbach was making a point that Henry was dyslexic but Charlie didn’t notice. Hints were dropped and it certainly could have gone in that direction. An end scene proves this theory wrong, which is just as well since this movie is already jam-packed with heavy emotional drama, but this could very easily have been the case for Henry. I guess making him a Mets fan—if the banner in his room is an accurate indication—is rough enough.

Much of “Marriage Story” is comprised of long scenes that don’t feel long at all. This is largely due to the flow of Baumbach’s script and his ability as director to move the story beats of each scene from one to the next seamlessly. A great script and great directing are nothing without great acting, and the cast is superb, particularly the two leads. Johansson’s look in the first act of the movie, with her short hair dyed red, may have reminded me way too much of Rupert Grint circa the fourth “Harry Potter” movie, but I also appreciated her lack of vanity and willingness to bear all emotionally. Likewise, Driver’s performance is also powerful, truthful, and emotionally resonant. These two have a fantastic blow up scene toward the end of the movie that will forever be on their highlight reels. What’s more, it earns its emotional impact based on all that we’ve seen come before it. The scene—and the movie—are cathartic in ways that are very rare in today’s movie climate of more simplified, visceral tastes. Here is a movie that makes you both think and feel, and it’s a lightning bolt of great adult contemporary drama. Buy it. 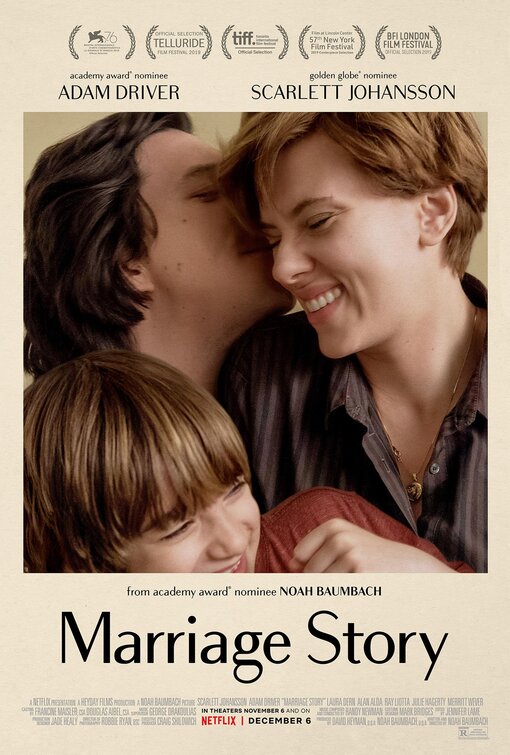 The origin story at the beginning of “Scoob!” reeled me in right away by providing details I never got from the classic animated television show. Young Shaggy (voice of Iain Armitage) is shy and lonely. He has a difficult time making friends. Along comes a nameless thieving brown dog voiced by Frank Welker who steals some gyro meat from a Venice Beach restaurant and is chased by a bike cop. The dog and Shaggy have a heterosexual meet cute on the beach. The nameless dog is then named Scooby Dooby Doo by Shaggy, based on some treats he was eating, and we learn that Venice, CA, has really weak laws concerning theft by dogs.

These were interesting character details to me. They’re the kind that I don’t really need to know, but they don’t hurt either and I’m glad I do know them. Shaggy and Scooby become the inseparable pals that fans of the show know and love in these early scenes. If only the rest of the movie was as interesting.

Instead, we get a “Despicable Me” retread plot in which a hunched, pencil thin mustache-twirling villain named Dick Dastardly (voice of Jason Isaacs) wants to unleash the legendary three headed dog from Greek mythology known as Cerberus on the world for…reasons that are still unclear to me. Motives are secondary in a movie like this anyway. What matters is that Scooby, grown up Shaggy (voice of Will Forte), and the rest of his mystery solving gang of heroic Fred (voice of Zac Efron), beautiful Daphne (voice of Amanda Seyfried), and brainy Velma (Gina Rodriguez)–whom the writers couldn’t resist also turning into a painfully obnoxious and annoying social justice warrior—need to stop him.

The team gets separated, as usual, with Shaggy and Scooby having their own adventure while the other three have theirs, and then they meet up in the end. The problem here is that Shaggy and Scooby meet up with a superhero named Blue Falcon (Mark Wahlberg) and a lot of screen time is focused on him and his team instead of Scooby and Shaggy. In the TV show, they’ve met superheroes before—Batman, most memorably—but they never let the guests take over the show. That is not the case here. Scooby and Shaggy become secondary characters in their own movie.

The other point of contention with “Scoob!” is that the mystery element is gone. We see a couple of times when the gang unmasks a criminal who “Could have gotten away with it, if not for you meddling kids,” but those are side notes in this movie’s story, which is mostly a globe-trotting chase movie, and a standard one at best. The name on the side of the gang’s anachronistic truck is “The Mystery Machine.” The only mystery about “Scoob!” is why there is no mystery in the main plot of this movie at all. Stream it. 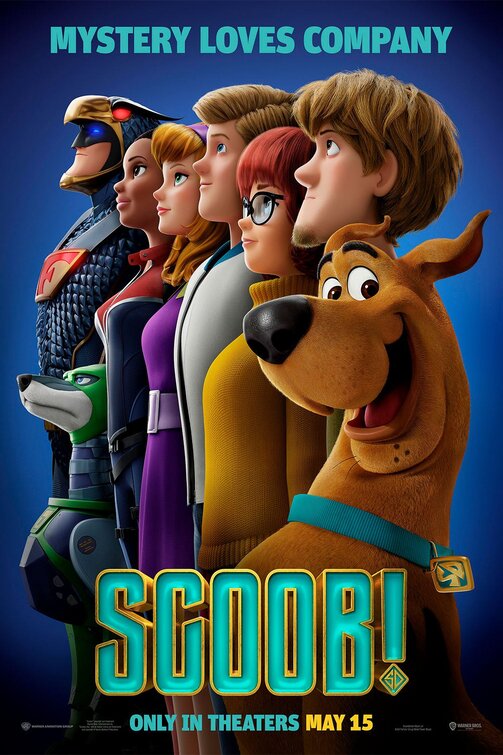