Blu-Ray Pick of the Week: The Very Excellent Mr. Dundee

“Archenemy” and “Fear of Rain” are also new to Blu-Ray this week.

The opening scene of “The Very Excellent Mr. Dundee” starts off with Paul Hogan, playing a fictionalized version of himself, walking around the Hollywood Hills when a large group of people ask him to handle a snake that’s on the path. This is because they think that Hogan is one and the same with his most famous character, Mick “Crocodile” Dundee, who Hogan played in three movies. Next thing we know, the snake lunges at Hogan, who luckily has a stick in his hands, and he bats it into a woman looking on. I laughed.

Shortly after, we’re treated to scene where Paul meets with some movie producers, whose office is furnished like a child’s romper room, and they want to make another “Dundee” movie with him. Their idea is to give the character a son, and to cast Will Smith. Paul has reservations about the casting, and after several black people are called into the meeting he states the obvious reason why. Anyone with an ounce of sanity and rationality would see his point. This, however, is Hollywood, where sanity and rationality  have long been abandoned.

It’s here, about ten minutes in, where I picked up on the vibe of “The Very Excellent Mr. Dundee” and it struck a chord with me. I’m a big fan of Larry David’s HBO show “Curb Your Enthusiasm,” in which David plays a fictionalized version of himself living in L.A., meeting with various celebrity friends, and getting into painfully embarrassing situations. This is Hogan’s version of that, but with a softer PG-13 touch, right down to the big house in the hills and the fact that his best friend/confidante is his agent/manager Angie (Rachael Carpani).

One of the great joys of “The Very Excellent Mr. Dundee” is seeing familiar faces again. Reginald VelJohnson, John Cleese, Olivia Newton-John, Chevy Chase, and Wayne Knight all make cameo appearances. Some are more immediately recognizable than others, but all are given something funny to do with their brief time. As Paul gets into more and more scrapes, his notoriety grows on the local news. Fellow Australians like Jim Jefferies and Luke Hemsworth denounce him in interviews. Costas Mandylor has a particularly funny one. Not sure if the producers even tried to get Australia’s biggest name in movies right now, Margot Robbie, but her almost cameo is good for a chuckle.

Speaking of old, familiar faces, it’s great to see Paul Hogan again. He’s had a few roles since 2001’s “Crocodile Dundee in Los Angeles” (a movie I think about whenever I’m in a fast food drive thru and it makes me smile), but nothing I’ve seen. Unlike some characters in “The Very Excellent Mr. Dundee,” I knew he wasn’t dead. Or, at least, I was pretty sure. It’s a treat to see him on screen again, and based on the start to finish laughs in this movie I hope in the next few years he does more than retire to a beach in Australia and chow down on Vegemite and turkey sandwiches all day. Rent it. 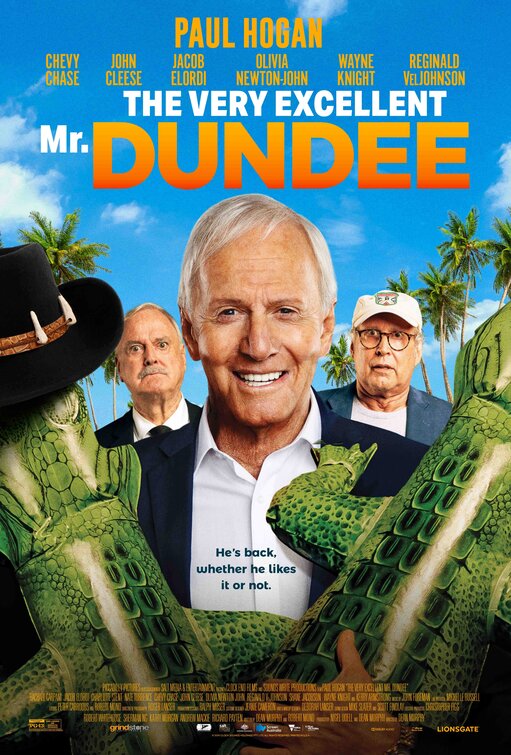 “Archenemy,” about a man who claims to be a hero from another dimension who fell through time and space to earth, starring Joe Manganiello, Skylan Brooks, and Luis Kelly-Duarte; and “Fear of Rain,” about a girl living with schizophrenia who struggles with terrifying hallucinations as she begins to suspect her neighbor has kidnapped a child, starring Katherine Heigl, Madison Iseman, and Harry Connick Jr.