Blu-Ray Pick of the Week: Knives Out 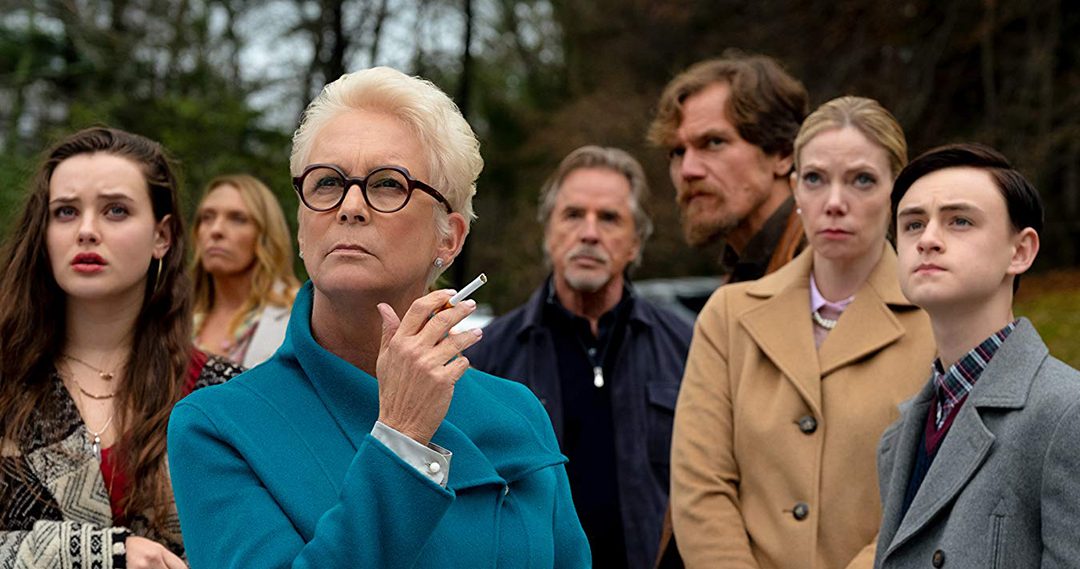 “Frozen II” and “Color Out of Space” are also new to Blu-Ray this week.

Knives Out
The opening shots of writer-director Rian Johnson’s “Knives Out” set the stage appropriately for a classic murder mystery. We see a large mansion on a green, well-manicured lawn with fog creeping in lowly behind a bare tree with fallen leaves all around it. The coldness of mid-Autumn in Massachusetts can practically be felt. Violins play ominous, minor key tones as housekeeper Fran (Edi Patterson) brings breakfast to rich and famous crime novelist Harlan Thrombey (Christopher Plummer), only to discover him dead from an apparent suicide. But there is more to this grisly scene than meets the eye and, as super sleuth Sherlock Holmes would say, “The game is afoot.”

There are indeed games afoot in “Knives Out,” and the one called in to figure them out is Benoit Blanc (Daniel Craig). In spite of the French, Hercule Poirot-sounding name, Blanc speaks with a southern drawl. He’s there because he was paid by an anonymous source to look deeper into Harlan’s supposed suicide. Once again in classic murder mystery set up, the suspects—Harlan’s family who were there that evening celebrating his 85th birthday—are introduced. There’s Harlan’s oldest daughter Linda (Jamie Lee urtis), her husband Richard (Don Johnson), daughter-in-law Joni (Toni Collette), and youngest son Walt (Michael Shannon) along with his wife Donna (Riki Lindhome). Then there is the next generation of his grandchildren: Linda and Richard’s prodigal son Ransom (Chris Evans), Joni’s daughter Meg (Katherine Langford), and Walt and Donna’s son Jacob (Jaeden Martell). Through flashbacks we see how some of them had a strong motivation to kill Harlan, while others are there to provide crucial pieces of information.

The only non-family member to be there that evening besides Fran is Harlan’s nurse Marta (Ana de Armas). Blanc recruits her as a partner to help solve the mystery since she has the least amount of motivation to murder Harlan. She also has an interesting character trait, particularly for a murder mystery story: If she lies, she will get sick to her stomach and vomit. Quite an interesting element to build into a story where it is expected that characters are going to lie a lot. To have one that suffers obvious physical ramifications from telling a lie presents a unique challenge for Johnson, who uses it brilliantly in the story.

A couple of weeks ago I admired newly anointed Best Picture Oscar winner “Parasite” for taking what would normally be the premise of an entire movie and using it as a springboard for deeper and more interesting things. I can pay the same compliment to “Knives Out.” It presents itself via its set up as a standard murder mystery story. This time Rian Johnson subverts those expectations in the right way—and I mean in a very, very right way. We actually get a satisfactory conclusion to the murder about mid-way through the movie. But the mystery is not done. There are still many pieces missing to the puzzle, and a shocking revelation takes the story in a fresh direction. I admire Johnson for carefully concocting and conducting so brilliant and twisty a narrative, one which holds up very well on repeat viewings. This is the kind of movie that will keep you guessing and its intricacies will keep you hooked. It’s joy to watch the story unfold, even after you know how it plays out. Buy it. 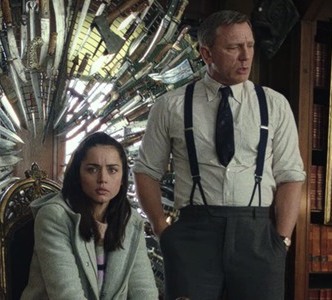 Also New This Week
Frozen II
Ah, to be a small child and have the world be full of surprises. This is after all the only age group who will believe it at face value when they see the bedtime story told at the beginning of “Frozen II” in which the king of Arendelle was betrayed and attacked by the neighboring tribe of Northuldra, completely unprovoked. To the rest of us, this is fishier than week old trout.

But it is this bedtime story that is at the heart of “Frozen II,” as Elsa (voice of Idina Menzel), Anna (voice of Kristen Bell), Kristoff (voice of Jonathan Groff), and my personal favorite, snowman Olaf (voice of Josh Gad), set off on a quest to find the origin of Elsa’s powers in order to save their kingdom. The quest, of course, takes them to Northuldra, where they find out that not everything is as they were led to believe.

While the plot and story may be less than stellar, they are serviceable. I’ll give it some extra points for the scene in which Elsa figures out some clever ways to run on water. The real treat in “Frozen II” is the artwork on the exterior shots, which are absolutely gorgeous. If nothing else, this is a fantastic looking movie.

But it more than just looks good, it sounds good too. Being a musical, there are multiple songs sprinkled throughout “Frozen II,” and everyone gets a chance to shine. While the ladies do a great job singing their parts, for me the fellas stole the show song-wise. Kristoff’s song was an energetic show stopper, and Olaf’s song—true to character—had me laughing out loud more than once. “Frozen II” is one of those movies that I put in the category of not nearly as good as the original, but a worthy and watchable enough sequel in its own right. Rent it. 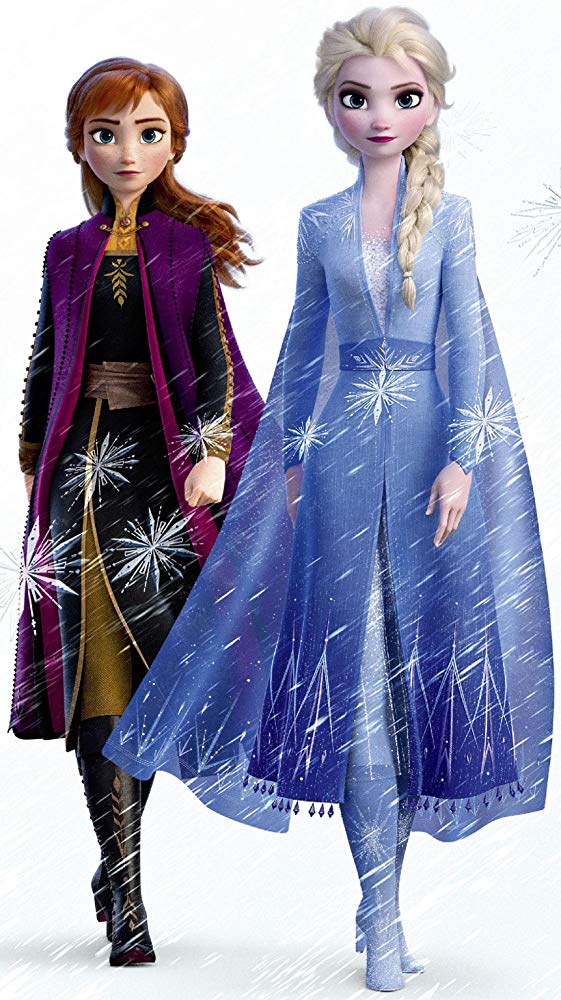 Color Out of Space
Author H.P. Lovecraft made a name for himself in what came to be known as cosmic horror—tales of beings or entities coming from outer space that wreak havoc on Earth. “Color Out of Space,” based on one of his short stories, is in this vein. It’s about a purple meteorite that lands in the secluded property of alpaca farmer Nathan Gardner (Nicolas Cage), his wife Theresa (Joely Richardson), daughter Lavinia (Madeleine Arthur), and sons Benny (Brendan Meyer) and Jack (Julian Hilliard). The meteorite seems harmless at first, and perhaps is a blessing. Crops planted on the property grow at a record pace. But not all is as good as it seems. The local water tester (Elliot Knight) discovers that the well water is contaminated, the alpacas start acting strange, and time seems to distort for everyone on the farm.

Things get weirder from there, and that is saying something given that this movie cast Tommy Chong as Ezra, a neighbor of the Gardner’s who likes to live off the grid. Chong specializes in weird, and he doesn’t disappoint here. Cage doesn’t disappoint either in overplaying the crazy as things unravel. This could be a bad thing, but I think it’s actually the reason Cage gets so much movie work. His tendency to explode and let loose is so well-known that it would be disappointing if he didn’t go nuts—or if he tried to but the director held him back. None of that here. There is even one moment where Cage freaks out in the front seat of a car, and in the middle of ranting and raving he quickly glances at the camera, presumably in the direction of director Richard Stanley, to see if he should tone it down. The answer is no—Cage is allowed to keep going, and it is one of many played to the rafters Nicolas Cage scenes that only he can pull off with such aplomb. Rent it.

Fun Double Feature Idea
Watch this movie on the same night as 1986 horror classic “From Beyond,” which is also based on a H.P. Lovecraft story and like “Color Out of Space” combines elements of cosmic horror and body horror in a grotesque, surreal, and entertaining way. 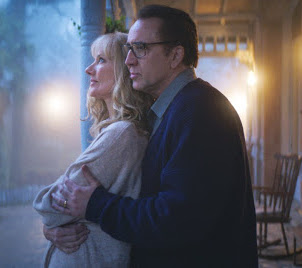