“Rogue Hostage” is also new to Blu-Ray this week.

One way to do a good sequel is to continue the story of the first movie, expand upon its world, and further develop its characters. The other way is to rehash the first movie but do it bigger, louder, and better than the original while praying that it’s nothing too overboard or obnoxious. This is a very fine line to walk but can be done with a fair degree of success—think of some but certainly not all sequels in the “Die Hard,” “Mission: Impossible,” and “Fast and Furious” franchises. Though not a longstanding franchise like the others, I’d put “Hitman’s Wife’s Bodyguard” in this “bigger and louder” category of sequel.

However, whereas most sequels rely on zanier stunts and bigger explosions to achieve their effect, “Hitman’s Wife’s Bodyguard” relies on bigger personalities. If you enjoyed the hilarious yet vitriolic banter between hitman Darius Kincaid (Samuel L. Jackson) and bodyguard Michael Bryce (Ryan Reynolds) in the 2017 original, you’ll like what this 2021 follow up has in store: Antonio Banderas as Aristotle Papadopoulos, a fiercely patriotic Greek with a dastardly plan to heal his country from crippling E.U. sanctions; Morgan Freeman as Michael Bryce, Sr., an accomplished hitman and role model for his stepson; and last but certainly not least, Salma Hayek as Sonia, the titular hitman’s wife who has an explosive temper and will go on a deadly shooting rampage for the mildest offenses. Add into the mix a cameo appearance by UK national treasure Richard E. Grant, hamming it up hilariously during a scene in a nightclub, and this is an amazing cast of crazies and weirdos.

The straightest arrow in the proverbial character quiver is Bobby O’Neill (Frank Grillo). He’s a Boston native stationed in Europe with Interpol. His back story as to how and why he got there are unclear (possibly cut for time because it feels like a scene that should have at least been written) but the important thing to know is that he wants to go back home to bean town. His opportunity comes about when he’s informed of Papadopoulos’s plan to poison Europe’s water supply. If he can stop the psychotic Greek, he can go home. When his informant is killed, he “recruits” (read: kidnaps and extorts) the assistance of Bryce and the Kincaids to stop Papadopoulos.

While Sonia going berserk with violence and expletive filled rants may be what mostly cranks “Hitman’s Wife’s Bodyguard” up to 11, that’s not to say the movie isn’t without its entertaining action scenes. One in particular in which a shootout turns into a chase involving cars, motorcycles, and a helicopter serves as an exciting centerpiece. So as to not leave any vehicles feeling left out, there’s a fair amount of boat action as well.

The tone set by director Patrick Hughes is just right. The dialogue scenes, even when they get slightly dramatic, are played for as much comedic effect as possible. The action scenes carry the same vibe and reminded me a lot of the type of thing seen on the animated TV show “Archer.” Perhaps that is the best mindset with which to view “Hitman’s Wife’s Bodyguard.” It’s a live action cartoon. A darn good one, too. Buy it. 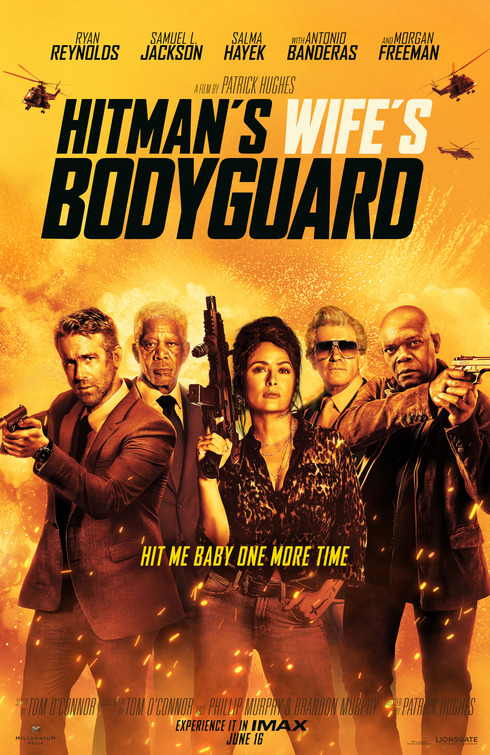 “Rogue Hostage,” in which a Child Protective Services officer and former Marine must save an immigrant child from a dangerous criminal who has trapped them and other hostages inside a neighborhood store, starring John Malkovich, Tyrese Gibson, and Holly Taylor; and “The Rebels of PT-218,” which recounts the true story from 1942 in which an American sub fights against the constant bombardment of German forces, starring Eric Roberts, Danny Trejo, and William Baldwin.