Blu-Ray Pick of the Week: Defending Your Life 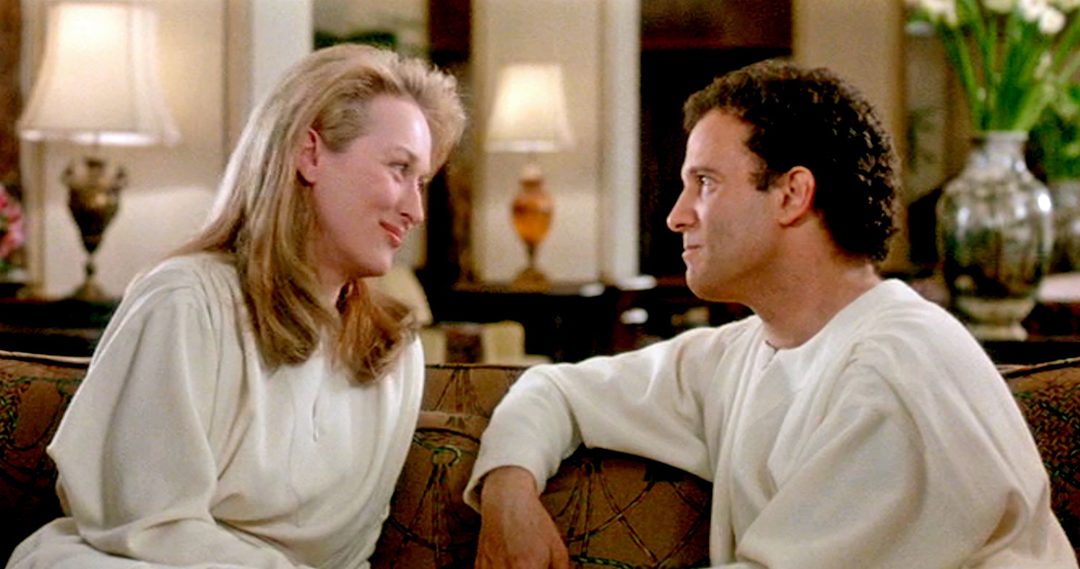 The great movies are the ones that stick with you. While most movies quickly evaporate after viewing, a great one provides memories that last a lifetime. I first saw writer-director-star Albert Brooks’ 1991 masterpiece “Defending Your Life” on home video when it came out around thirty years ago. Back then I loved it so much that I watched it twice. Several great moments have stuck with me over the past three decades. When I hear the name “Albert Brooks,” I think of this movie. While he has made other movies I’ve really liked, like 1985’s “Lost in America” and 1999’s “The Muse,” none have given me the long term, reflective pleasure of “Defending Your Life.”

It’s borderline criminal that this brilliant, original, inspired comedic gem hasn’t received a proper Blu-ray release until now. Thank goodness for home video distribution company The Criterion Collection, whose classy and much revered releases are the pinnacle of high-quality home entertainment. They are doing justice to “Defending Your Life” with a new digital restoration that was approved by Brooks, HD audio, and new interviews as well as excerpts from old ones.

The story is a fairly simple one, which is part of its charm. When we first meet Daniel Miller (Brooks), he’s an advertising executive in Los Angeles receiving a birthday present from co-workers. Miller is charming and witty as he says his thank yous, then proceeds to the local BMW dealership to pick up his birthday present to himself—a new car. We quickly learn that though he might be a generally happy man, he’s a reckless driver—a fact that finds him driving head on into a bus.

For most people this would be the end, but things are just getting started for Miller. The credits roll as he and other catatonic recently deceased are wheeled into their trams and sent to their hotels in Judgment City. As described by his defender, Bob Diamond (Rip Torn), this isn’t Heaven and it isn’t Hell–which doesn’t exist except that L.A. is getting close to it. The closest comparison would be to Purgatory, except that instead of it being a place where souls go to be purified before ascending into Heaven, this is a place where they are put on trial to see if they lived lives worthy of allowing them to pass through. Each person has a certain number of days of their life that are looked at. The prosecutor, who in Miller’s case is hard-nosed Lena Foster (   Lee Grant), uses these days as examples of how a person lived in fear and therefore, did not accomplish what he or she should have in life. It is up to the defender to assist the person in defending their life.

What a concept! The sheer brilliance of the premise alone makes me gush with admiration. Also, what horror. Imagine having every little mistake, foible, and misstep—no matter at what age or how seemingly minor—used against you as proof that your life was not lived adequately according to the universe? Then again, there are the moments of courage and righteousness that can be used to prove that you did live your life “properly” by their terms. While “Defending Your Life,” is a clever and witty comedy, the debate between the “lawyers” puts the comedy aside as they go at each other. Each one raises valid points as Torn and Grant go all out with passion and intensity to prove their side of the case. There are law dramas that wish their courtroom banter was this stellar.

Any reviewer writing about “Defending Your Life” would be remiss to not mention Meryl Streep, who plays love interest Julia. The “love story” can be a death knell for a movie as it unnecessarily drags out the plot and forces it to go through the motions that we’ve seen hundreds of times before. Brooks avoids that mistake. The Julia character is used in just the right amount, and in such a way that is organic to the story and not forced or tacked on. It also helps that she is played by Meryl Streep, who was clearly having a lot of fun. The date scenes with her are cheery and easy-going—a strong counterbalance to the trial scenes, which while they have some very funny moments, are stressful for Miller. The one bright spot for him as he goes through his ordeal is seeing her and taking the edge off by going to places like the Past Lives Pavilion to see who they were before they were the person they are now. That scene alone makes “Defending Your Life” worth watching. All the other well-written, funny, and thought-provoking scenes make this great work worth owning. Buy it. 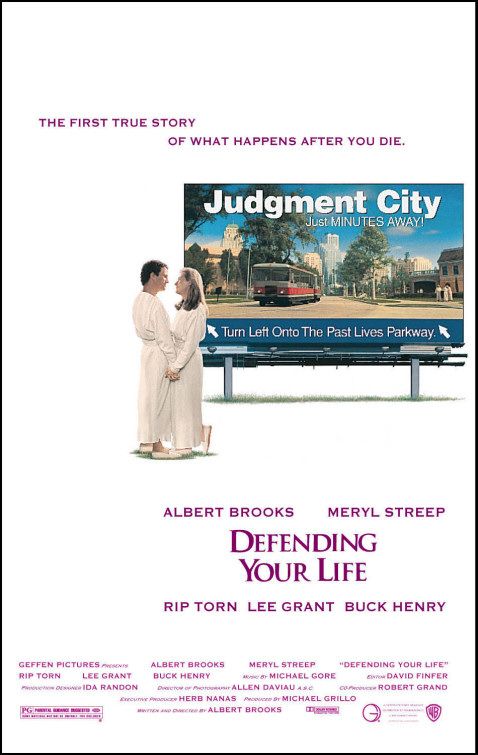 ”Wonder Woman 1984” or “WW84” or, if I had my way, “Wonder W. MCMLXXXIV” does not have a subtitle. If I had to give it one, I’d borrow the title from a classic western and call it “The Good, the Bad, and the Ugly,” because that’s how the movie can be summed up. Let’s take them one by one.

The Good: Once again, Gal Gadot is perfectly cast as Diana Prince/Wonder Woman. Sadly, there isn’t much room for her to expand on what she did with the character in the 2017 origin story, but she carries this movie just as well as she did that one. Kristen Wiig has the most interesting character arc in “WW84” and she really sinks her teeth—fangs and all—into the role of Barbara Minerva/Cheetah. The true stand out though is Pedro Pascal as misguided oil tycoon Maxwell Lord. He has fun hamming it up as a power hungry madman bent on world domination.

The bad: Chris Pine returns as Steve Trevor. It’s not his return in and of itself that’s bad—we’ll get to that in the next paragraph—it’s just that it’s obvious that after the first “Wonder Woman” Pine was done with the character and he sleepwalks through the movie just to collect the paycheck. The spark that he had with Gadot the first time around is strikingly absent. Aside from being her sidekick and flying a plane, his presence makes little difference.

The opening of “WW84” starts off with young Diana (Lilly Aspell) on Themyscira. She’s participating in a kind of Amazon triathlon. The CGI on her fellow contestants makes them look like they’re made from weightless rubber as they jump around. It reminded me of the CGI of Peter Parker jumping on rooftops in 2002’s “Spider-Man.” But “WW84” is a 2020 movie. What is it’s excuse? Then when she’s done, mentor Antiope (Robin Wright) teaches Diana a lesson that sounds like every line of dialogue came from a fortune cookie.

“WW84” self-indulgently opens again with a scene in which grown up Diana, in 1984, stops a jewel heist at a mall. At least this scene pays off, but the campy tone is way off with what came before and will come after. Even for a movie in which a man turns himself into a wish-granting genie of sorts, it’s laughably silly and out of place.

This brings us to the ugly, which can be summed up in two simple words: the story. If there is any video of the story conferences that co-writer/director Patty Jenkins had with the execs at Warner Bros., I’d love to watch it just to know what they were thinking.

“WW84” brings Steve Trevor back in another man’s body. We know nothing about this man and barely see him. He is merely credited as Handsome Man and is played by Kristoffer Polaha. So many questions. Why have Trevor take over a body? Why not just bring him back in his own body? We mostly just see Chris Pine anyway. Having him in a different body offers nothing to the story. How was the man chosen? What about his life? Doesn’t he have a job, co-workers, family, friends, etc. who care about him? What if someone who knows him saw him with Diana? This is a weird form of zombie-ism in the voodoo sense of the word, meaning that his mind is taken over and his body is controlled by someone else. Do I even need to spell out the word one would use if Trevor and Diana—against this man’s will—used his body for sex, which is implied? In what alternate dimension is this okay? How did this get greenlit?

Diana and Trevor are also thieves. They steal a jet from the Smithsonian. Good thing that in this world, all planes operate the same or Trevor wouldn’t be able to fly it. The deal with Lord and his ability to grant wishes is that in return he takes something from the person. It’s never explicitly stated what Lord took from Diana, but it’s implied that it’s some of her powers. So, even without full power Diana can will the entire jet invisible. I know that the invisible jet is a part of “Wonder Woman” lore, but this is not the way to do it.

Speaking of Lord, his rules for granting wishes are all over the place. In one scene, he can’t grant a wish because the person used theirs. Later, he grants someone a second wish because he’s “feeling generous.” Also, Lord has to be touching people in order to grant their wishes. He gets the idea to connect with people via a worldwide satellite broadcast. Just when I thought the premise couldn’t get any thinner, that got thrown in. Also a good thing that everyone understands English.

Nothing in “WW84” makes any sense. Most of it is idiotic and some of it is downright intelligence insulting. If you’re looking for a well-constructed story, Skip it. However, if you’re a big fan of Gadot, Wiig, and especially Pascal, and if you’re able to turn your mind completely off (a requirement) and watch them have some fun on screen, then Stream it. 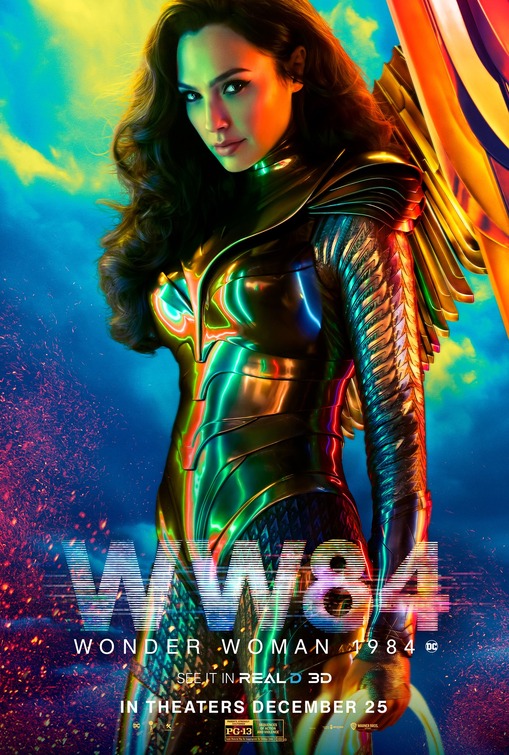 “Another Round,” the Oscar-nominated Danish movie about four friends, all high school teachers, who test a theory that they will improve their lives by maintaining a constant level of alcohol in their blood, starring Mads Mikkelsen.