“In the Heights” is also new to Blu-Ray this week.

It’s quite possibly the most extreme of all cinematic rarities to have the words “mob gangs” and “family film” in a movie’s description, but here we are. “Bugsy Malone” is a G-rated 1976 family film about two rival mob gangs in 1920s New York City battling for control. Two elements help soften the usually hard edges of a gangster movie: Instead of bullets, the characters “kill” each other with whipped cream; and instead of adults, the cast is comprised entirely of children.

I’ll pump the brakes for a second and recognize how that could be a red flag to some. I know this description sounds eerily close to the creepy “Baby Burlesks” of the early 1930s in which Shirley Temple and other very young children were exploited and sexualized in the name of “comedy.” Those movies are stomach churning and repugnant and thank goodness they were only short films. I can assure you that no such disgusting perversion is on display in “Bugsy Malone.” The vibe here is more like kids playing dress up and pretending to be adults. It’s a funny and entertaining movie for all ages.

Written and directed by Alan Parker, “Bugsy Malone” is a throwback to classic 1930s gangster movies with some musical numbers thrown into the mix. The sets and costumes evoke the freewheeling times of illegal booze and speakeasies—though in the speakeasy of Fat Sam (John Cassisi), the drinks look more like Gatorade than anything mixed together in a bathtub. Parker has an adept ear for the rat-a-tat dialogue of the old James Cagney/Edward G. Robinson movies from the era. It’s a good thing he directed as well as wrote because of the specificity of the way the dialogue has to sound. It’s practically a different language due to the rapid pace and all the slang.

Fat Sam’s rival is Dandy Dan (Martin Lev). Dan gains the upper hand in his turf war with Fat Sam when he gets a hold of the brand new “splurge” gun. This is a weapon shaped like a Tommy Gun that shoots whipped cream at the target. The previous method for dispatching an enemy was to throw a cream pie at them, Soupy Sales style. This new weapon shoots the cream from a further distance and at a rapid pace. This is bad news for Sam and his crew since it’s made clear that once you’re creamed, you’re gone.

Caught in the middle of all of the chaos is Bugsy Malone (Scott Baio). He’s a street hustler and acquaintance of Sam. It’s also hinted that he once carried a torch for Sam’s main squeeze, Tallulah (Jodie Foster). He’s over her though and is now pursuing Blousey Brown (Florence Garland). She’s a force to be reckoned with who just wants to be an entertainer. Bugsy wants to make her happy by getting them two tickets to Hollywood so she can pursue her dream. To do this, he has to do some jobs for Fat Sam, who is struggling to stay in business through the constant attacks by Dandy Dan.

The biggest crack up in “Bugsy Malone” are the cars. Since the actors are children, they’re not driving real cars. Instead, bicycles were modified to look like 1920s cars, complete with running boards, head lights, and passenger seats. Instead of putting his foot down on the gas, the driver pedals to get the car in motion. There’s one scene that’s particularly funny in which two cars—that are actually bikes—are in a chase. Seeing the drivers pedaling under the bottom of the car is good for a chuckle.

“Bugsy Malone” isn’t all period costumes, fast talk, whipped cream, and bicycle cars. There are multiple memorable music numbers as well. One in particular has Sam’s goons singing and dancing in the street about how they could have been anything they wanted to be, but they chose to be bad. The song gets a reprisal at the big grand finale and ends the movie on an energetic high note, if not necessarily a positive one. After all, if creamed equals dead and gone, what does that mean for certain characters at the end? Or perhaps Parker’s choice to be more lax with the cream rules is his way of saying this is all in good fun and to stop being such an adult by reading so deeply into things. Be like a kid—just have fun. Buy it. 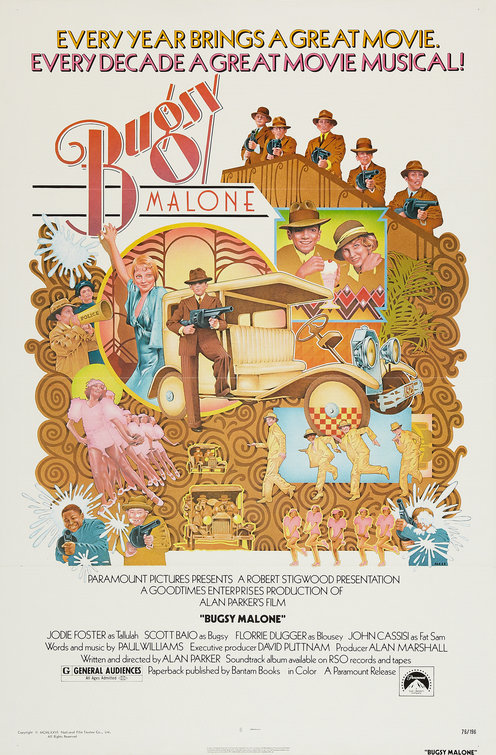 “In the Heights,” based on the Broadway musical with music and lyrics by Lin-Manuel Miranda. The story is set over the course of three days, involving characters in the largely Hispanic-American neighborhood of Washington Heights in New York City, starring Anthony Ramos, Melissa Barrera, Leslie Grace, and Jimmy Smits. “Mortal Kombat Legends: Battle of the Realms,” in which combatants from Earthrealm and Outworld fight in the tournament to end all tournaments, featuring the voice talent of Joel McHale, Jennifer Carpenter, and Jordan Rodrigues.