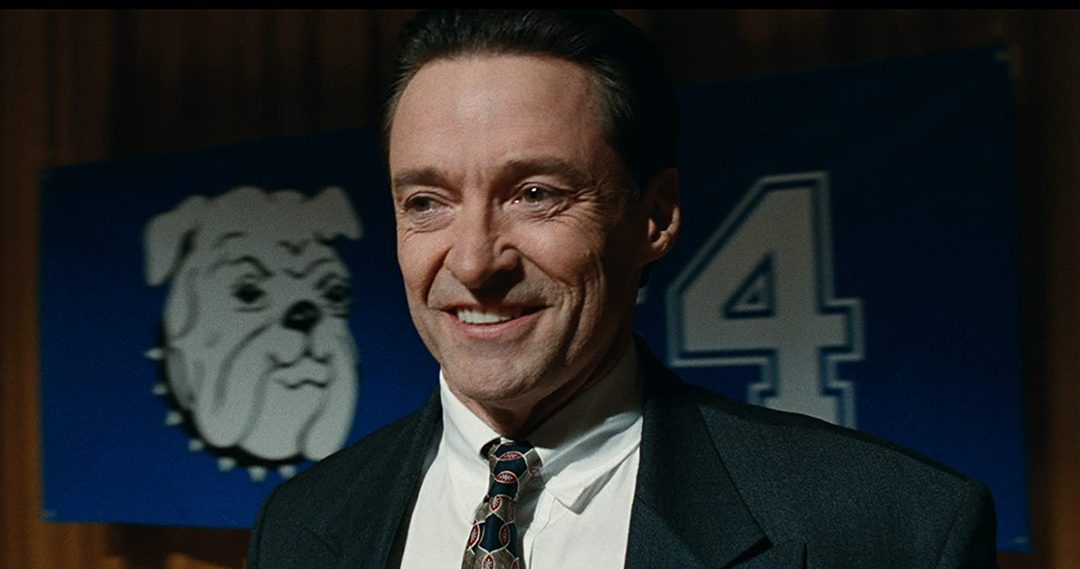 “Superman: Man of Tomorrow” is also new to Blu-Ray this week.

Midway through “Bad Education” there’s a montage sequence in which small candy canes and Christmas cards are being stuffed into envelopes. These cards are meant for the parents of the Roslyn, Long Island, NY, school system. The signature on the cards is that of the superintendent of schools Frank Tassone. The cards, however, are not individually hand signed. Rather, Tassone has a rubber stamp with his name on it. The cards are processed in no time when all someone has to do is stamp it and move on to the next one.

Aside from being a cool and convenient tool that made me think about getting one before realizing most of the signing I do is electronic, it also serves as a great metaphor for the movie. “Bad Education,” which is based on a true story, starts off in 2002 and takes us through a school year that reveals the single largest public school embezzlement scandal in American history. What we see come out of this by the end is the sort of cavalier, rubber stamp mentality had by officials high up in the school system toward the taxpayers and the easy-breezy entitlement these officials felt to just take what was there for their own selfish purposes with barely a second thought.

Tassone, as played by affable everyman Hugh Jackman, is the surprising central figure at the heart of this scandal. This is because Tassone is extremely well-liked. He makes an effort to know the names and interests of everyone with whom he comes into contact. He started his career decades ago as an English teacher (a trait that comes in handy when he’s obliged to host a book club) and worked his way up the ranks to superintendent. His improvements to the Roslyn school district are appreciated by all—students, parents, faculty—as well as the school board, which is headed by Big Bob Spicer (Ray Romano), who chose Tassone for the superintendent role.

The veneer of Tassone begins to crack when he tells a promising young journalist named Rachel Bhargava (Geraldine Viswanathan) that an article she’s writing on a proposed skywalk for the school does not have to be a fluff piece. This inspires her to dig deeper into invoices, receipts and various other financial records to eventually uncover the mass levels of fraud that have been going on in the school system for decades. The first uncovered perpetrator of fraud is Pam Gluckin (Allison Janney), who’s caught when she uses the school district credit card for home improvements. That, however, is the just the tip of the iceberg.

Tassone very reasonably convinces the school board to not get law enforcement involved and handle things on their own. Gluckin is told to make reparations and is asked to resign. In a small moment I really liked, as she leaves the office for the last time she hands off a note to be given to Tassone. Having seen way too many Hollywood hack job movies, I thought what was written would be something cheap and crass. It wasn’t. When we finally see the note, it’s a call back to a comment that Tassone made to Gluckin earlier. It also makes a statement to keep in mind as the movie unfolds and shines a brighter and brighter light on Tassone.

Indeed, “Bad Education” is played straight down the middle on a very human level. The good times and bad times are all tuned to the emotional level inherent to them. Nothing is overplayed or melodramatic, and this movie thankfully did not delve into bathos the way it so very easily could have. Take for example a scene in which Tassone has to deal with the mother (Stephanie Kurtzuba) of an elementary school student (Calvin Coakley). I am sure many in education will recognize the type of overbearing, “my child is perfect” mother seen here—you’ve no doubt encountered her at some point. The scene could have picked the low hanging fruit and turned into something crass and vile. Instead, it took the pent up hostility that Tassone had for her and released it in an articulate and thought provoking way. I saw his point and have to say that he tried his best for as long as he could. In spite of Tassone’s faults, I was on his side in that scene.

That’s the great part about “Bad Education.” It does not paint in black and white with broad strokes. Much like in real life, no one is truly all good or all bad. There are many different shades of gray and leanings toward one way or the other. The only question that I still had after watching the movie is whether Gluckin or Tassone had any remorse about what they did. From what I can gather, they were more upset about getting caught than they were about the crimes they committed and the community they hurt. Ultimately, I think it’s good to not get that clarity on them. Instead, you can watch for yourself and decide what you think of them and who they are. Buy it. 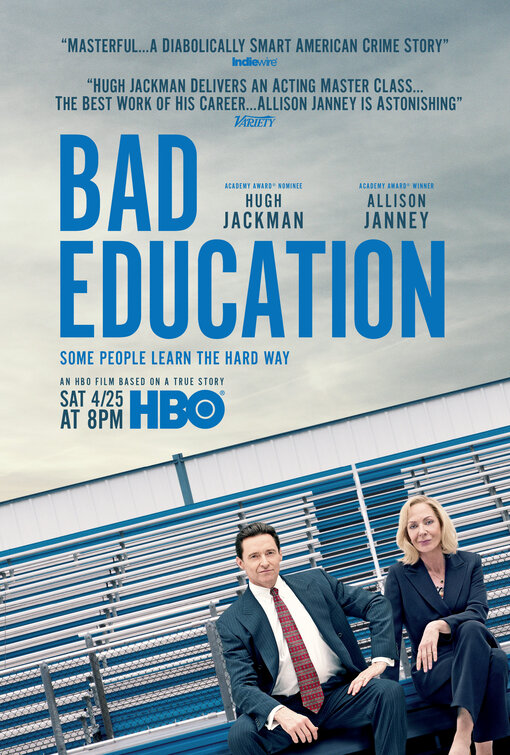 After over eighty years, it can be challenging to find a new take on a classic hero. “Superman: Man of Tomorrow” solves that by giving us the middle chapter in what we know about Superman. It’s not his origin story that begins on Krypton and shows him growing up in Smallville, except for a brief scene in the beginning. It’s also not the portrayal of Clark Kent as a reporter for the Daily Planet who turns into Superman and saves the day.

Instead, this is college student Clark/Superman (voice of Darren Criss). He’s away from his Smallville home and living in Metropolis but still in touch with Ma and Pa Kent (voices of Neil Flynn and Bellamy Young). He’s an intern at the Daily Planet and is better known as “Coffee Boy” than he is as Clark. He sees Lois Lane (voice of Alexandra Daddario), who is a grad student and new hire at the Daily Planet, for the first time at a press conference in which she confronts Lex Luthor (voice of Zachary Quinto). Lois is a hard-nosed journalist to be, but doesn’t have the softer edge that we are more familiar with that makes her more likeable. She’s driven, but callous.

The theme of “Superman: Man of Tomorrow” is one of finding who you are and finding your place in the world, whether you are from that world or not. The movie does a good job at staying on point, while at the same time giving us extensive action scenes to help pad out the movie’s run time to feature length. This may not be the best “Superman” movie ever made, but the approach is fresh and it provides some nourishing food for thought amidst all of the action spectacle. Rent it. 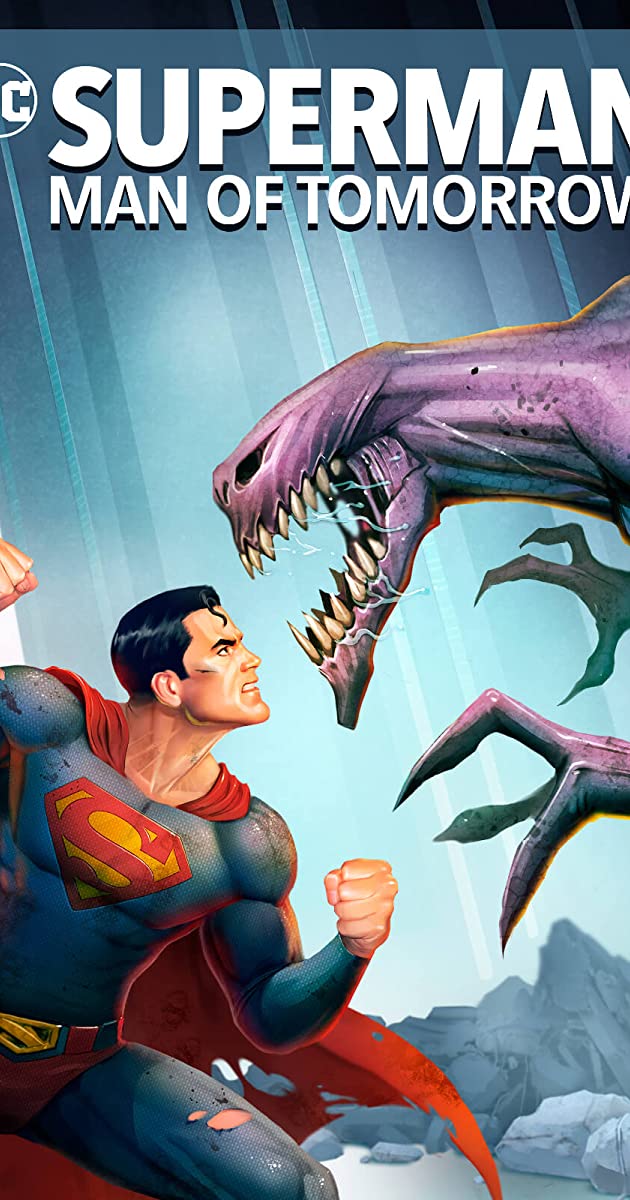